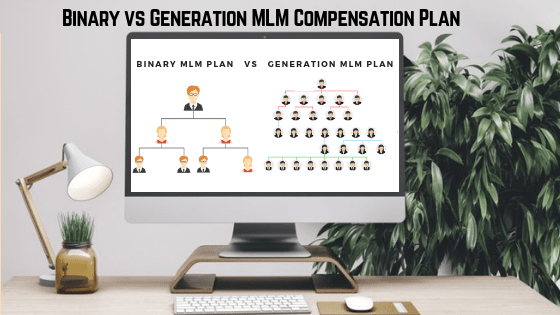 Hope you all would have heard about the most fascinating and lucrative business. Yes! that is MLM business. By comparing the MLM plans, it will provide you the outline of the MLM business to stay profitable. Here in this writing, Binary Vs Generation MLM compensation plan is discussed, which will allure more people to accomplish MLM business successfully.

Wisely choose a customized MLM software for the MLM plan to achieve your business targets.

Though there are various MLM compensation plans followed by different organizations. The most popular plan which is adopted by most of the MLM companies is Binary MLM, Generation MLM plans.

In this article, we will see the difference between Binary and Generation MLM compensation plan.

Before looking into it, we will see what is binary and generation plan.

What is Binary Plan?

What is Generation plan?

The generation plan is an MLM plan which is based completely on product selling and profit-sharing of the marketing business.

1. The structure is perfect with two legs as left and right leg of binary whereas here in generation plan, the number of downlines does not restrict width as well as depth-wise.

Spillover is nothing but when a new member enters other than left and right leg of a distributor. The new member will be under the downline of the sponsor.

7. The binary plan expands very fast as it needs to recruit only two downlines for a member. whereas in a generation plan, there is no limit for downlines.

3. In Binary MLM plan each member earns a commission based on a certain percentage of downline’s business volume. In generation MLM plan the commission is calculation is by profit-sharing in the generation at each level.

4. In Binary, there is no level commission and commission will not decrease with increasing levels. In Generation plan, the commission decreases as the level of generation increase. For example at the first level the members may get 10%, second level 6%, third level 4% and so on.

1. Binary MLM plan is structure is in such a way that the rank of the member depends upon the position of a member in the network. Whereas In a generation plan, the rank of similar or different rank people will be under each generation level.

1. In Binary MLM Plan, there are generally two types of bonuses i.e pairing bonus and sponsor bonus involved. Here in Generation plan, it is based on target sale and at the level of the generation.

1. When compared to the product advertisement in Binary plan, here Generation plan is mainly based on product selling and so less advertisement is required.

In this article, hope you will be able to understand the benefits of binary and generation MLM plans by analyzing the differences between them. It is important for any MLM organization to analyze and customize the MLM plan to stay profitable with their MLM business.

Similarly, the comparison of Unilevel vs Binary MLM Compensation Plan provides you more information about the other two of the major MLM plans.

No Thoughts on Binary vs Generation MLM Compensation Plan